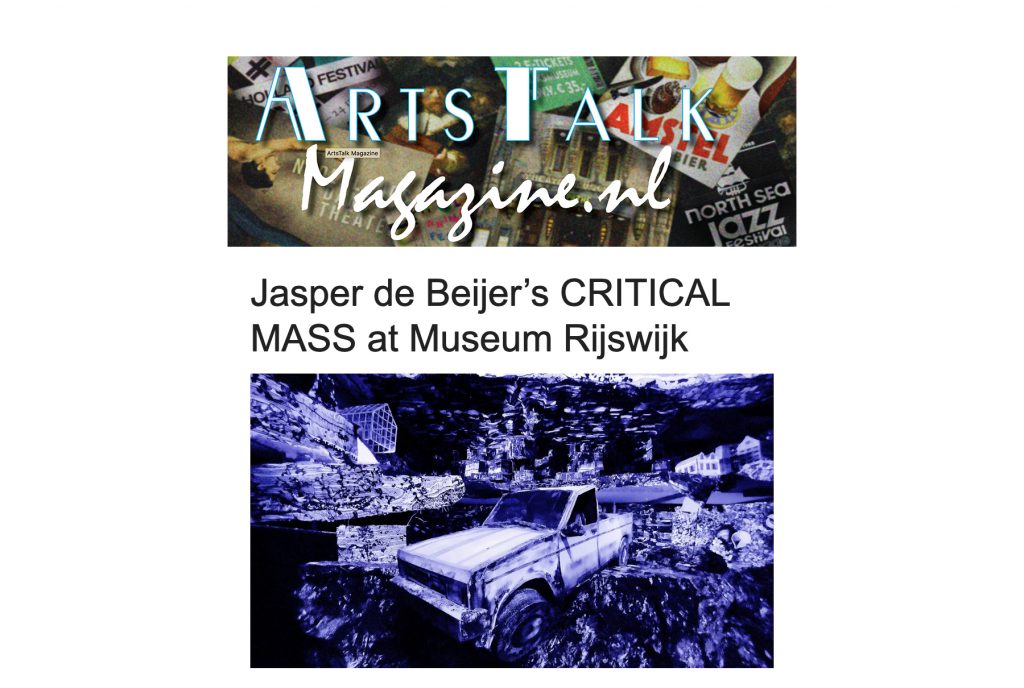 I think the one word that would describe the work of Dutch artist Jasper de Beijer is eclectic. He is an artistic scavenger, a collector par excellence. The accumulations and focus of his interest range from the Battle of Verdun in the First World War to Isambard Kingdom Brunel, from Mexican drug cartels to Dutch colonialism. He collects photos, press cuttings, old stereo cards and any other ephemera he can find on his chosen subject. He then sets to work bringing them all together to make his art, using models and/or photographs of the models or figures in exotic costumes and make-up.

His current exhibition shows his new installation, Critical Mass, surrounded on the gallery walls by examples of his source material. The installation is sited in a black box in the centre of the gallery. The darkened, predominantly blue space represents a hole which we wander through, surrounded by weird and wonderful tableaux. The effect is part shrine, part grotto and part model railway layout without the trains. There are houses, a church, a jungle, mountains, a pick-up truck and a horse, all made of paper and cardboard. The result is like a Technicolor avalanche or the set for a TV puppet show lit by black light with only the white paper visible. The work was made specifically for Museum Rijswijk and is a culmination of the artist’s work over the past two decades. It’s one of those things where no matter how long you look at it, how many times you return, you will always find something new.

The exhibition was made possible by the Agnes van den Brandeler Museum Prize. In 2019 the Agnes van den Brandeler Foundation invited several medium-sized museums in the Netherlands to submit proposals for exhibitions and accompanying publications that would highlight the work of a highly talented Dutch artist who has not had enough exposure in Dutch museums over the past years. The Foundation chose the proposal by Museum Rijswijk for a retrospective exhibition of Jasper de Beijer’s work and the comprehensive publication on his oeuvre.

As I have said before, for a smallish museum in a smallish town, Museum Rijswijk punches well above its weight. In addition to its two biennales – Paper and Textile – of international standard it mounts exhibitions which are original and often quirky. A visit to Museum Rijswijk will always be rewarding and none more so than for Jasper de Beijer’s Critical Mass.

Link to the article here.